This page is dedicated to my brother, Phil Calder, who died on February 10, 2006.  Phil suffered a massive heart attack at the age of 42.  He is survived by his wife, Aleta, and their 2 year-old daughter, Ella.  Aleta and Phil's second child is due in October of 2006.

Please post comments!  Phil's children will not have vivid memories of him, and this is one of the ways they will get to know their dad.  It also seems to promote my mental health to remember things about my brother.  I hope you will share some stories. 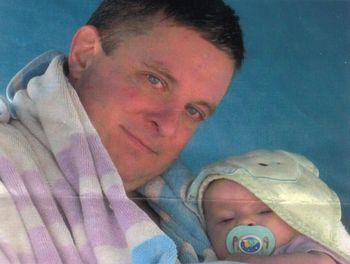 Phil Calder and his daughter, Ella. 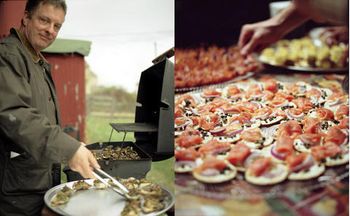 Phil, doing one of the things he did best: making the finest dinner in Thurmont that day! 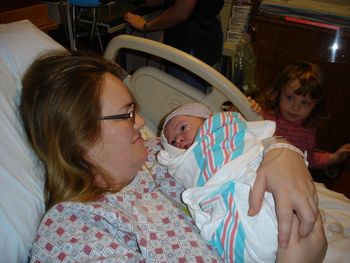 Phil's son, Philip Thomas Calder III, was born on October 8, 2006, 2 days shy of the 8-month anniversary of his father's death. Here is the brave boy, with his brave mother. 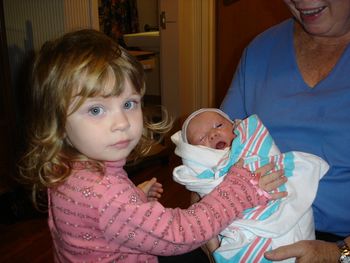 Both of Phil's children, Ella and Phil III, at the hospital shortly after Phil was born.

A lot of people have been asking me what happened this month, and it’s a hard story for me to tell verbally.  It’s not so much that it hurts to talk about it, although it does hurt a great deal.  It has more to do with the details of the whole story having become blurred in my mind (in many cases, this happened almost immediately).  It has been easier for me to get it right by pecking away at a draft, and coming back to it as I remember more and better.  If memory serves me, the following account is accurate

My brother and best friend, Phil, died sometime early in the morning of Friday, .  This has been the most difficult event of my life, and I am sure my mother, father, and Aleta, Phil’s wife, would say the same thing.  Phil and I were close, particularly during the last 15 years or so.  He became content once he got a job doing what he truly loved to do, which was flying airplanes.  Phil found his greatest happiness, though, after his daughter, Ella, was born nearly two years ago.  I had never seen him as happy as he was when he had Ella.